Pulsating Magnetic field can be successfully used in the treatment of:

Pulsating Electro Magnetic field has a soothing tranqilizing effect on brain and it retards the aging process. Dr. K.E.Madean of New York city states that " Cancer can not exist in strong magnetic field". (Biomagnetic Research Foundation. Chicago) has direct influence of bone metabolism and accelerated cellusformation.

Influence the tissue through improvement of the oxygen supply and influence of the permeability of the cell membrane.

This is an excellent aid to expedious recovery during post operative surgery, degenerative orthopedy and complicated traumatology cases in which one can scarcely life without it.

A large volume of research has been going on Russia, Italy, Japan and America. The various pulsating Magnetic field therapy equipments have been developed after a study of their reports.

The instrument consists of the following :-

The desired magnetic field is produced by conrolled currents flowing through a solenoid consisting of several turns of insulated copper wire. Magnetic fields of varying strength can be produced along the axis by controlling the current. This solenoid is mounted on a bed which is along its axis, and the solenoid is moveble to cover the desired area of the body.

The intensity is continuously adjustable mentaing the potential difference varying from 0 to 160 v. A meter indicates the voltage and corresponding field.

A built in timer enables the treatment time to be automatically set. The machine is switched off at the end of the timed period.

A holistic scanner by which painful and inflamed area of the body can be located. This can also be used to identity the diseased organ.

The instrument can be used in the treatment of all the aliments indicated in magneto therapy.

An ultra long wave electromagnetic bed is specially developed for complete rejuvenation ( Kayakalpa) of the whole body through cells. Six electromagnetic coils are fitted in to this bed and it can be folded and can be carried in a carry bag.

The control box consists of voltmeter and strength of the field can be adjusted by a control. Pilot lamp and fuses are provided. There is a automatic timer built in and the instrument works on 230 V AC.

This second generated ECT device is designed with complete electronics/computer control to ensure minimum side effects associated with ECT, especially the memory impairment. It produces adequate therapeutic seizures with much less power than the conventional sinusoidal constant voltage type waveform. Reliability and safety features are adequately built into the system.

» Dosage minimum with full electronic control.
» Failure of system easily detected.
» Adequate safety to medical attendants and to other electro-medical apparatuses in the vicinity of patient.
» Trigger to cutoff EEG/ECG monitors during ECT.
» Dynamic Impedance of the patients displayed after ECT.

Transcranial magnetic stimulation (TMS) is a noninvasive method to cause depolarization in the neurons of the brain. TMS uses electromagnetic induction to induce weak electric currents using a rapidly changing magnetic field; this can cause activity in specific or general parts of the brain with minimal discomfort, allowing the functioning and interconnections of the brain to be studied. A variant of TMS, repetitive transcranial magnetic stimulation (rTMS), has been tested as a treatment tool for various neurological and psychiatric disorders including migraines, strokes, Parkinson's disease, dystonia, tinnitus, depression and auditory hallucinations.

Effects on the brain

The exact details of how TMS functions are still being explored. The effects of TMS can be divided into two types depending on the mode of stimulation:-
» Single or paired pulse TMS causes neurons in the neocortex under the site of stimulation to depolarise and discharge an action potential. If used in the primary motor cortex, it produces muscle activity referred to as a motor evoked potential (MEP) which can be recorded on electromyography. If used on the occipital cortex, 'phosphenes' (flashes of light) might be perceived by the subject. In most other areas of the cortex, the participant does not consciously experience any effect, but his or her behaviour may be slightly altered (e.g. slower reaction time on a cognitive task), or changes in brain activity may be detected using sensing equipment.
» Repetitive TMS produces longer-lasting effects which persist past the initial period of stimulation. rTMS can increase or decrease the excitability of the corticospinal tract depending on the intensity of stimulation, coil orientation and frequency. The mechanism of these effects is not clear although it is widely believed to reflect changes in synaptic efficacy akin to long-term potentiation (LTP) and long-term depression (LTD).

Other adverse effects of TMS are:-

» Discomfort or pain from the stimulation of the scalp and associated nerves and muscles on the overlying skin; this is more common with rTMS than single pulse TMS,
» Rapid deformation of the TMS coil produces a loud clicking sound which increases with the stimulator intensity that can affect hearing with sufficient exposure, particularly relevant for rTMS (hearing protection may be used to prevent this),

» rTMS in the presence of incompatible EEG electrodes can result in electrode heating and, in severe cases, skin burns. Non-metallic electrodes are used if concurrent EEG data is required.

Studies of the use of TMS and rTMS to treat neurological and psychiatric conditions have shown only modest effects with little confirmation of results. However, publications reporting the results of reviews and statistical meta-anaylses of earlier investigations have stated that rTMS appeared to be effective in the treatment of certain types of major depression under certain specific conditions. rTMS devices are marketed for the treatment of such disorders in Canada, Australia, New Zealand, the European Union, Israel and the United States.

There is evidence that rTMS can temporarily reduce chronic pain and change pain-related brain and nerve activity, and TMS has been used to predict the success of surgically implanted electrical brain stimulation for the treatment of pain.

Other areas of research include the rehabilitation of aphasia and motor disability after stroke, tinnitus, Parkinson's disease and the negative symptoms of schizophrenia. TMS has failed to show effectiveness for the treatment of brain death, coma, and other persistent vegetative states.

It is difficult to establish a convincing form of "sham" TMS to test for placebo effects during controlled trials in conscious individuals, due to the neck pain, headache and twitching in the scalp or upper face associated with the intervention. "Sham" TMS manipulations can affect cerebral glucose metabolism and MEPs, which may confound results. This problem is exacerbated when using subjective measures of improvement. Depending on the research question asked and the experimental design, matching this discomfort to distinguish true effects from placebo can be an important and challenging issue.

A recent multicenter trial of rTMS in depression used a "sham" placebo treatment that appeared to mimic the sound and scalp stimulation associated with active TMS treatment.

"Although the treatment effect was statistically significant on a clinically meaningful variable (remission), the overall number of remitters and responders was less than one would like with a treatment that requires daily intervention for 3 weeks or more, even with a benign adverse effect profile". However, a review of the trial's report has questioned the adequacy of the placebo, noting that treaters were able to guess whether patients were receiving treatment with active or sham TMS, better than chance.

In January 2007 an advisory panel of the United States Food and Drug Administration (FDA) did not recommend clearance for marketing of an rTMS device, stating that the device appeared to be reasonably safe but had failed to demonstrate efficacy in a study of people with major depression who had not benefitted from prior adequate treatment with oral antidepressants during their current major depressive episode. The panel agreed that "unblinding was greater in the active group, and considering the magnitude of the effect size, it may have influenced the study results." However, the FDA determined in December 2008 that the rTMS device was sufficiently similar to existing devices that did not require a premarket approval application and allowed the device to be marketed in accordance with Section 510(k) of the Federal Food, Drug, and Cosmetic Act for "the treatment of Major Depressive Disorder in adult patients who have failed to achieve satisfactory improvement from one prior antidepressant medication at or above the minimal effective dose and duration in the current episode". The user manual for the device warns that effectiveness has not been established in patients with major depressive disorder who have failed to achieve satisfactory improvement from zero and from two or more antidepressant medications in the current episode and that the device has not been studied in patients who have had no prior antidepressant medication.

Soon after the FDA cleared the device, several members of Public Citizen stated in a letter to the editor of the medical journal Neuropsychopharmacology that the FDA seemed to have based its decision on a post-hoc analysis that did not establish the effectiveness of rTMS for the treatment of depression. The writers of the letter expressed their concern that patients would be diverted from therapies such as antidepressant medications that have an established history of effectiveness. 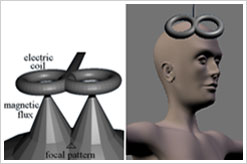 TMS uses electromagnetic induction to generate an electric current across the scalp and skull without physical contact. A plastic-enclosed coil of wire is held next to the skull and when activated, produces a magnetic field oriented orthogonally to the plane of the coil. The magnetic field passes unimpeded through the skin and skull, inducing an oppositely directed current in the brain that activates nearby nerve cells in much the same way as currents applied directly to the cortical surface. The path of this current is difficult to model because the brain is irregularly shaped and electricity and magnetism are not conducted uniformly throughout its tissues. The magnetic field penetrates only to a maximum depth of three centimeters into the brain, in the area directly adjacent to the coil.

Mohans Electronics and Illuminators was founded by Dr. Mohandas three decades ago. Till then we are manufacturing and marketing all types of medical equipments.

Dr. Mohandas is famous for his abilities in medical and electronics field. He has invented a number of equipments for the medical field, which helps a lot of people to relieve from their diseases.